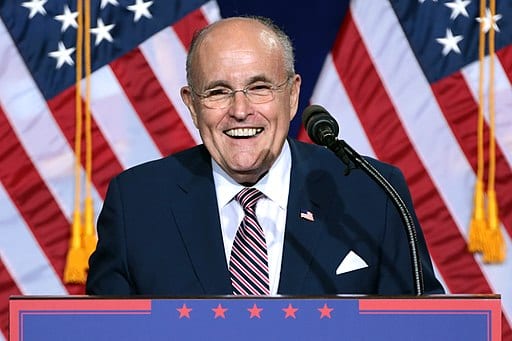 ELLIJAY, Ga – Former New York Mayor Rudy Giuliani (R) expressed that the country is at a “major crossroads” and it’s up to like-minded individuals to “preserve” it.

He added that the Georgia legislature conducted the “Best job [of] investigating the [election] fraud” last December. A special session concerning election fraud wasn’t called in December, but the Georgia House of Representatives and Senate held separate hearings to hear from individuals who experienced inconsistencies during that election cycle.

A lawsuit is currently in the court system concerning possible election fraud in Fulton County.

Giuliani attended one of those hearings and presented the highly contested security footage from State Farm Arena that featured some Fulton County poll workers pulling ballots from underneath tables.

The Secretary of State’s office conducted multiple recounts following the election and maintain that the Georgia election was honest and fair. They found no evidence of significant fraud.

Giuliani wasn’t satisfied with either Kemp of Secretary of State Brad Raffensperger (R) claiming they never analyzed the video and going so far as to call Raffensperger “a damn liar.”

He believes Vernon is the “right man for Georgia” with experience running a government office as an executive as well as a legislator. He added that Vernon “went through hell to be Republican” and the former Representative understands Trump’s vision.

Giuliani’s in the midst of his own trials and tribulations. A new book is claiming Giuliani told Trump to “just say we won” on election night. A move that reportedly infuriated Trump advisors. Giuliani’s stated that the claims were false and made by anti-Trumpers.

In April, Giuliani’s Manhattan home and office were raided by federal agents who seized computers and cell phones for an investigation into Trump’s business dealings. The former New York Mayor has stated they didn’t take the Hunter Biden laptop, however.